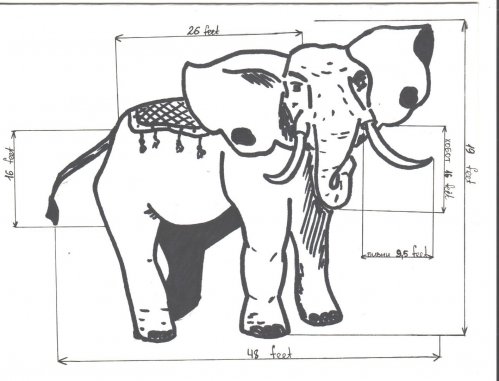 He is a very large dull white Siam elephant and responds to name Jumbo.

He is also omnivorous and gluttonous.

"Who was the robber?"

Our noble profession is vindicated. Here is your elephant!

It was an intricate and difficult business; there were a thousand avenues of escape and opportunities of concealment. The thieves had friends and pals everywhere.

This is the greatest windfall that any detective organization ever had. The fame of it will travel to the ends of the earth, and endure to the end of time”

-Excuse me. I’m a reporter from New York. I have got some questions.

-How long did the search last?

-How much money was spent?

What loss do you have?

- We have lost 2 detectives.

Thank you. You are the greatest detective we know.

-Hey, I’m a reporter from Glover.

It is known 60 detectives always were in the basement. Why didn’t they notice the elephant?

-Ok. Sixty persons had been killed, and two hundred and forty wounded. In one place the elephant had interfered with an election and killed five repeaters. More than that factories gutted, harvest devoured.

Thirty-four of the most distinguished detectives on the forces have taken part in the search. How could it happened?

- My detectives worked days and nights, took themselves in dangerous situations. It was an intricate and difficult business.

- The last question. This elephant was the gift for our country. Why have you organized his stealing?

- Hm … The fame of my name will travel to the ends of the earth!